Dogbane is a plant that greatly resembles milkweed.  It is in the same plant family as milkweed.  The problem with dogbane is that Monarch and Queen caterpillars will not eat it.

Many people (including entomologists) have mistakenly given dogbane to their caterpillars only to watch them starve to death.  They have no clue what happened.

There are three species of dogbane in the US.

So how can we tell if what we see is dogbane or common milkweed?

Both have white sap that can cause damage to eyes.  Use caution when handling either.

Both can have red stems and veins.

Both can have green stems and veins.

Their blooms are entirely different than each other. 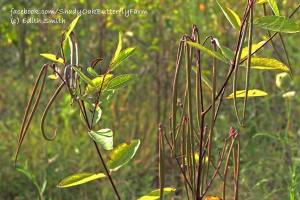