Drowned caterpillars is something that happens before we learn not to use containers with open water. Even when enthusiasts cover containers, sometimes a caterpillar still finds a way to work its way to the water and drowns. Over a decade ago, on a whim an employee at our farm used salt (he had brought to flavor his snack veggies) to revive a caterpillar that had drowned. Since then, we’ve revived quite a few caterpillars before we changed our method of keeping host plant cuttings fresh to prevent standing water.

3. Cover it With Salt 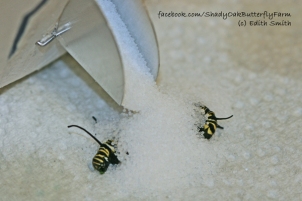 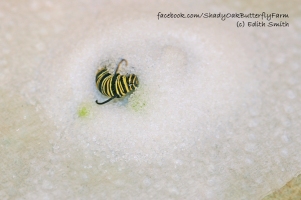 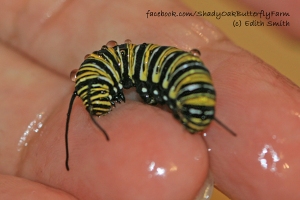 Marbles or similar objects prevents larger caterpillars from drowning.  Do not fill to the top of the marbles.  Fill only part way up the cup. 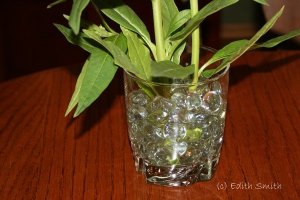 If the caterpillar hasn’t been under water too long, it can be revived. Although not moving, lying still at the bottom of the container, it can be lifted out, laid on a paper towel, and often brought back to life.

The steps are simple.

1. Remove the caterpillar from the water. (Obvious, yes.)

2. Lay the caterpillar down and, if possible, pat it GENTLY with a paper towel or other item to push some water out of its spiracles and trachea.

3. Cover the caterpillar with salt. Yes, simple salt. Salt draws water out of the spiracles and trachea, allowing air to enter them again.

4. Wait. This is the hard part. Simply wait. Don’t move it, don’t touch it, and don’t mess with it. Just wait. Allow the salt to do its work.

5. After several minutes (perhaps five minutes or longer), the caterpillar will often begin to move. Again, do not touch it. Leave it alone.

6. When the caterpillar finally crawls from underneath the salt, turn on the water faucet and rinse it off. Salt shouldn’t be left on the caterpillar. Yes, just stick it under running water for a second to remove the layer of salt from its body. It can close its spiracles at will, like we close our mouths. It will not harm the caterpillar. Remember, in nature, it survives rainstorms that dump several inches of rain in one day.